skip to main | skip to sidebar

This adorable guy showed up in our garage the other night. 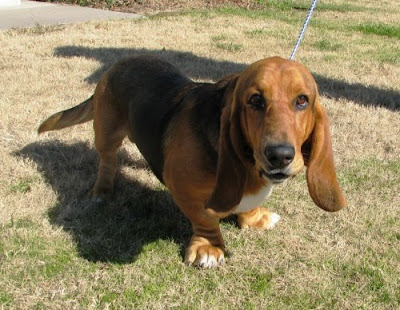 He ran in when we opened the door and cowered behind the car, whining and trying to make his big old self as small as possible. I managed to lure him out with a little food and once he ate, he decided I was his new forever friend and promptly rolled over on his back to get his belly scratched.
Damn it, I was in love.
Lucky for Captain Carl, some folks from down the street noticed him earlier in the night and had decided to track him down and take him to the city shelter. Because otherwise? That dog would have been ours. No way could I have kept him overnight and then turned him over to the animal shelter. I mean, look at that face! 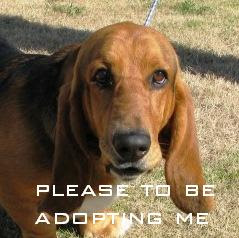 After they left with him, I begged and begged to adopt him and when that didn't work, I gave the Captain my best frowny face. That didn't work either.

Captain: No dogs.
Me: But he chose us!
Captain: No he didn't.
Me: He did so! He came right into our garage.
Captain: No dogs. Not right now.
Me: You're just a big jerk face.
Captain: Okay, fine. I'm a jerk face.
Me: First Regina, now Carlos.
Captain: Carlos?
Me: That's his name.
Captain: Stop naming every stray dog you see!
Me: I can't help it. Their names just come to me.
Captain: Right.
Me: Tell me that dog didn't look like a Carlos. He's all short and fat and cool. Totally a Carlos.
Captain: I'm thinking he looked more like a Fred.
Me: Oh way to be original, Mr. Smokey and the Bandit.
Captain: *blank stare*
Me: His name is Carlos Spicy Weiner.
Captain: Carlos Spicy Weiner.
Me: Yep.
Captain: Where have I heard that before?
Me: Nowhere. Except here. Because I thought it up. Because I'm awesome.
Captain: Hmmmm...
Me: So once Christmas is over, I am totally adopting Carlos if he is still at the shelter.
Captain: Nope. No dogs.
Me: You'd rather Carlos get murdered?
Captain: Our city shelter is no-kill. Nice try.
Me: He's not gonna be euthanized. He's gonna get shanked.
Captain: *blank stare*
Me: Because he's in doggy prison and there are always about 15 pit bulls in doggy prison and pit bulls are like the shanky-ist prison dogs ever and they will totally pick on Carlos because he's got short legs.
Captain: Your logic really scares me sometimes.
Me: I'm putting my foot down. Carlos Spicy Weiner is ours on January 2.
Captain: Family Guy!
Me: What?
Captain: You stole that name from Family Guy.
Me: Yeah well....your mom.
Captain: No dogs.

UPDATE: Houston has started a "Free Carlos" campaign over at his blog. I sense the Captain is waivering.....I need more comments and maybe even copies of Houston's poster on your blog to convince him. 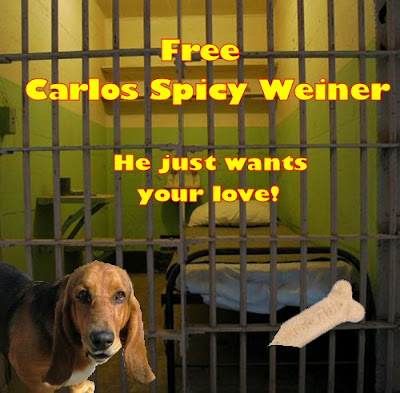 Email ThisBlogThis!Share to TwitterShare to FacebookShare to Pinterest
Labels: Captain Carl, Your Mom

Well..when they find Carlos in his cell with a shiv made out of a Milk Bone stuck in his ass, you can at least tell your husband you told him so.

How can the Captain say no to that face?!?!?

Yours and the dogs.

DON'T DO IT! YOU WILL HAVE TO CLEAN UP CRAP, FEED THE DAMN THING, CLEAN PEE OFF OF YOUR SOFA. FIND YOUR SHOES CHEWED UP. IT IS HORRIBLE. HE IS CUTE THOUGH.

Didn't your husband recognize the Christmas miracle that happened? Replace Jesus with Carlos, no babies and viola - the Christmas story.

I wish he showed up in my garage. He'd so be in the house. No asking hubby. Just in the door.

Instead, I get the neighbor's cat who uses my flower bed as a liter box.

Carlos is a good name for just about anything. (*points at crotch*)

Seriously? That is the cutest freakin dog, how could the Captain say no?

Ha! I named the weiner dog that I rescued from running in the street during a thunderstorm this summer "Stever Carlos". He was old and adorable and my stupid husband made me take him to a shelter the next day instead of keeping him. Granted, his family had been looking for him, but whatever...

Another couple of heads and that's Cerberus right there.

Awww, how could you not love that face!

I have a dog just like that almost exactly and I am gonna blog about her today because you made me happy I have her. Thanks!

Also, face punch the Captain with your boobs and I'm sure he will cave and let you keep Carlos.

Yay!! You're gonna get him, right?? Poor puppy is so lonely and cold and sad in the shelter right now. You should go pick him up, right now. GOGOGO!!!

He's pretty much a cat anyhow. Look at him. He's wee.

Ohhh, I hope you get Carlos Spicy Wiener for Christmas!!!

Just play your husband that awful Sarah McLachlan ad with the blind kitten until he caves.

Merry Xmas to you and Captain...

This was one of the funniest blogs I've read in a long time. Carlos Spicy Weiner. Ha. Congrats to the Captain for nailing the Family Guy reference.

I have joined the cause for you!

WE WILL NOT BE DENIED!

Oh Miss Yvonne, Carlos needs you! I'm starting a petition for grumpy ol' captain...
1. Peggy
There ya go! Now go get CSW before its too late!
What's Capn's aversion to doggies anyway?

My word ver is regni! Like Regina! If that's not a Christmas miracle...

I TOTALLY THINK YOU SHOULD GO DOWN THERE AND ADOPT THE DOG ANYWAY! MEN DON'T GET A CHOICE...THAT IS IF THEY WANT SOME GOOD ORAL SEX THE REST OF THEIR LIFE!

aww Carlos Spicy Weiner needs a home! It's like a freakin' christmas story.

You are funny. You should just rent Carlos instead of owning. Do they have that?

You could always put a bow on Carlos and give him to Kiddo for Christmas. Can't take back a gift of love, right?

Merry Christmas from our family to yours, Miss Yvonne!!

I've found your blog, along with a few others lately from Aiming Low & friends. You make me laugh & pee myself a little. I like it!
Your husband has a spicy weiner type'a blog message on my page. Enjoy!!

Awww. Dogs are so stinky though. Captain Carl is right.

You MUST adopt Carlos before he starts doing prison art and making shivs! YOU HAVE TO!!!!!

Go get him now, today! He needs you, you need him. Captain will be fine trust me with 5 kids here there are always new pets coming around and the man falls in love with all of them eventually.

I bet you wake up Christmas morning with Carlos under your tree wearing a big red bow-- Right Captain Carl-- hint, hint.

Merry Christmas to you and your family. I've really enjoyed reading you blog and getting to know you this past year. I always leave smiling!

Awwwww. Carlos belongs to some little eight year old girl that cried herself to sleep last night will always remember 2009 as the Christmas she lost her only true friend. She'll grow up bitter and cold and someday be appointed Secretary of State. Ha-ha!

FREE CARLOS! I've started a Twitter campaign to Free the Spicy Weiner. If I were any closer to Dallas I would come get him myself... And the prospect is STILL tempting...

Totally thought *I* was the only one who randomly finds dogs outside her house. Hmm. Good to know, good to know.

(And you know we're totally going to overthrow the Captain. It's not even a question now).

Poor pup, though. I had a basset (or a beagle/basset, never could quite tell) show up at my house once ... looked a lot Mr. Carlos there. Fun dog.

Aw tell the Captain not to be such a hard ass. Carlos is cute and obviously needs lots of love. Plus it's the holidays!

Hounds are the sweetest ever, just ask my Beagle! Captain will fall in love with Carlos in a heartbeat

Pit bulls ARE the shanky-est!

Dude, I am on the campaign TRAIL!!!

Yes, Yes! Get Carlos Spicy Wiener, he is MEANT to be with you. Look at those eyes. Is Captain Carl made of stone? Does he really want to forego the rumpy-pumpy for all of 2010 if you don't get Carlos? I don't think so. Do it Captain Carl, do it.

Yes, yes, you MUST have the Spicy Weiner boy. Stinkin' cute, he is.

Bring him home, he needs your love. Boo Captain Carl for not being more compassionate.

Tell the Captain that you've visited Carlos in the clink. And that he's expressed his devotion to you by getting a prison tattoo - Yo Mama in a heart. 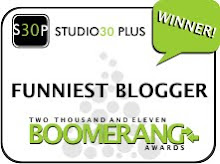 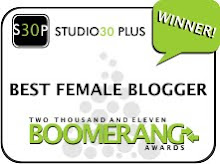 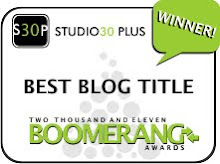 My Stalkers...But in a Good Way 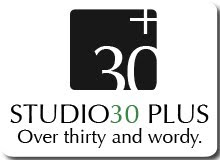 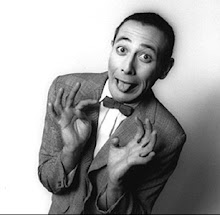 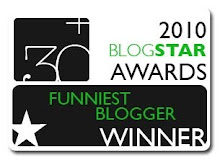 Check Out These Blogs, Yo 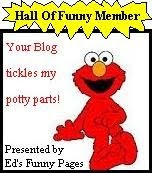 The Grossest Award Ever, From Steamy. 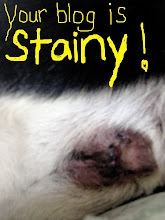 We had a good run, Carlos. Peace out. 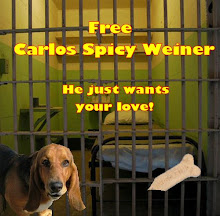